Getting into the Celtic spirit, the Bug Farm’s impressive 50,000-strong leafcutter ant colony swapped their leaves for dragons, daffodils and leeks for Saint David’s Day this year.

The ants, tropical leafcutter ants (Atta cephalotes), are residents of the Tropical Bug Zoo at Dr Beynon’s Bug Farm in St Davids, Pembrokeshire. The ants are all sisters and their mother, the queen (who can live for up to 20 years), resides in a nest tank at the farm surrounded by a fungus garden which the ants feed with leaves and then eat. 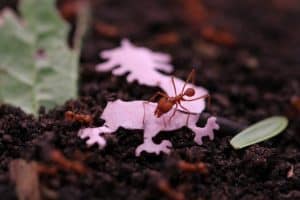 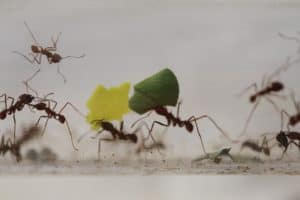 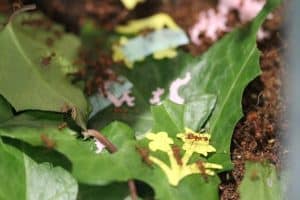 In honour of Saint David’s Day, the ants were given edible paper daffodils, leeks and dragons to carry around the clear pipes that make up their home, in the Tropical Bug Zoo. The ants carried the Welsh icons back to their nest to feed their fungus.

These 5mm long ants carried these icons of Wales for more than 29.5m in a journey back to their nest. This is the equivalent of a human man carrying them 10km!

On attempt number one, it took the leafcutter ants just under 15 minutes to make the journey back to their nest. The human world record for a 10km race is just over 26 minutes. However, the superhero ants smashed the human world record while carry the weight of another 4 ants in their jaws! Imagine running a 10km race in 15 minutes while carrying 4 of your mates on your shoulders! Saint David’s well-known saying of “Do the little things” should perhaps instead be updated to “Respect the little things“!

Attempt number two, which took place at the same time as the Ras Dewi Sant 10km race, took the ants 26 minutes meaning that they beat the winning Ras Dewi Sant 10km time and equalled the human world record! By the Saturday, the ants were well into the weekend vibe, chatting with their sisters along the way and taking a full 45 minutes to make the journey!

The ants are now happy to be once more collecting leaves until Easter, when they may have to go on their very own Easter egg hunt!